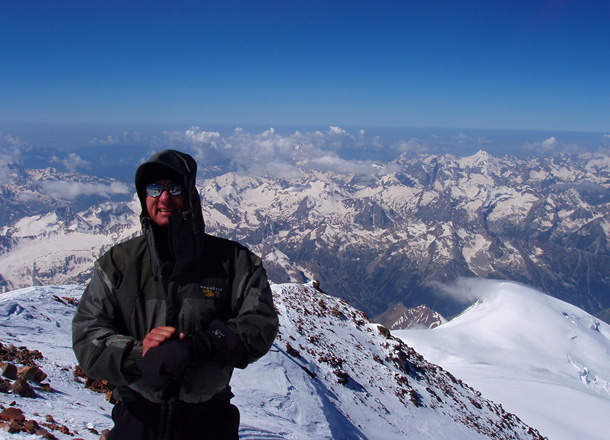 I can’t say enough kind words for the beautiful people in this part of the world. My taxi driver was no exception. He reminded me of my grandfather. His car was a twenty year old beater that you could buy in the U.S. for less than a thousand dollars, but the way he cared for and took pride in it; it may as well have been a Rolls Royce Silver Shadow. I tipped him accordingly

Getting to the peak was the real adventure after having been quarantined, questioned and then fleeced by the local police for $200 USD as I was leaving the airport. They were carrying fully-automatic weapons, so I thought my chances of making a run for it were going to be slim to none. Anyway, they are twin peaks with the one on the left being the official summit. 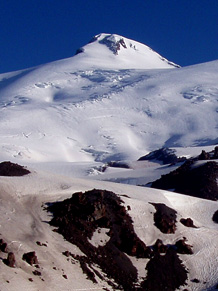 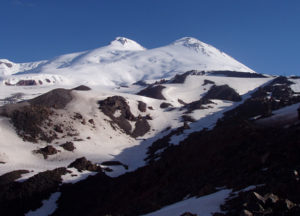 I really enjoyed the food at the mountain villages near the base of the peaks. For breakfast they served two versions of oatmeal but 100 times better tasting. For lunch and dinner they barbecued the meat on open grills right next to your table. It was a good thing I went there to climb or I could have easily slogged home an extra ten pounds. Everyone was so friendly even though most of them spoke no English.

The climb was very strait-forward with no surprises. Heading down from the summit a very young kid was “on my heels” so I stepped aside and permitted him to pass. He took no more than ten steps, tripped over his crampons, fell, tried to do a self-arrest but his ice axe slipped through his hands as it wasn’t attached, and proceeded to slide head-first down the steepest part of the slope. The speed he reached in just a few seconds was astounding. I believe that if it had been any other peak he would have died but instead he came to rest in the pass between the two peaks. I’m sure that’s a ride he’ll never forget.

This could have been my grandmother. She was a merchant that helped me pick out some hand-crafted wool gloves and socks as gifts. Like I mentioned earlier the people were amazing and I thoroughly enjoyed my visit to rural Russia.